Our Irish ancestral link begins with the birth of my 2nd great-grandmother Eliza O’Meara on 23 February 1834 at Gortmore Townland, Youghalarra Parish, County Tipperary, Ireland to Daniel & Margaret (D’Arcy) O’Meara. She was baptized 25 February and her godparents were Patrick D’Arcy and Brigid O’Meara. These surnames are also spelled as Darcy and Meara.

The following information was obtained from the  Daniel O’Meara Family History compiled by Mary Ellen ‘Tink’ Stewart-Bailey and the History of Gratiot County, Michigan written by Willard D. Tucker, a son-in-law of Ira and Eliza (O’Meara) Briggs.

Daniel and Margaret (Darcy) O’Meara immigrated from County Tipperary, Ireland. They first settled in Plympton, Lambton, County, Ontario, Canada  sometime between 1845/48.  This dating is based on the fact that their last child born in Ireland was John (Feb 1845) and their first born in Canada was William (Jul 1848). These are the children who emigrated with them: Mary, Eliza, Patrick,  Ellen, Margaret, James and John. William and Theresa were born after their arrival in Canada.  They stayed in Canada for a while then ‘walked’ to Emmett, St. Clair County, Michigan where they settled. They lived there about six years and then moved to Kenakee Township, St. Clair County, Michigan. According to the History of Gratiot County  by Willard D. Tucker:

There the parents passed the remainder of their lives; substantial and influential farmers of the township and respected members of the community. Daniel O’Meara died in 1886; and Margaret Darcy O’Meara died in 1884. The nine children of Mr. and Mrs. Daniel O’Meara – all excepting the youngest still living – are given in their order as follows: Mary, Eliza, Patrick, Ellen Bridget, Margaret, James, John, William and Theresa.

Eliza R. O’Meara married Ira Briggs at Port Huron, Mi on September 15, 1854. He was the brother of Merrick D. Briggs, who was married to Eliza’s sister Ellen Bridget.

With the exception of about two years in Sanilac County, Eliza and Ira Briggs resided continuously in St. Clair County until the spring of 1881, when they moved to St. Louis, Gratiot County, where they resided until the winter of 1904-05. While on a visit at the home of their daughter, Mrs. Cora Goldsmith, at Edmore, Michigan.  Mr. Briggs, who had been in poor health for many years with rheumatism and kindred ailments, was called to rest, passing away on February 22, 1905. He was a man with many admirable qualities, respected by all. He was buried in the Edmore cemetery.

After the death of her husband, Mrs. Eliza Briggs lived in Edmore with Cora and her husband. “It is but simple justice to say that she is a woman of sterling worth. For many years, her husband being incapacitated for business in his later life, owing to ill health, by her industry, energy and indomitable persistence in conducting her business (dressmaking); she provided a comfortable living for her family, feeding, clothing and educating them in a way that would have been a credit to anyone with twice her strength and resources. She is fully entitled to a vacation of perfect leisure; but to keep her idle it would be necessary to bind her, hand and foot; and the law would not permit that. 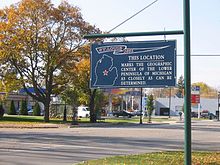 This site uses Akismet to reduce spam. Learn how your comment data is processed.

Photos of Don and Mark
view